Lawn bowls:  At first glance, it’s a group of like-minded older people enjoying a game in the summer.  A second look reveals that some players are younger than average, but seem to blend in well.  The object is similar to several other competitive games with a ball in that there is a target at which the bowler aims his bowl.  After missing, the player’s bowl is not removed but is left in place for a measure.

The playing surface is grass which has been cut quite short–likely three times this week!  has been levelled, weeded and fertilized; and even the grass seed has been applied to meet certain specifications.  Only heel-less footwear is permitted to be worn while using it; so this is not just a lawn!  The players are following rules for delivering their approved set of bowls even during training.

The rules of play apply both at this club and at all Canadian clubs, so that competition is taken to club members not just in Canada but to other continents.  Each player gradually learns how to bowl, to skip a team, to train others and to promote the sport.  Some borrow bowls until they learn the size, weight and shape of bowl that best suits their delivery technique.  It’s not just a game we play!

Not everyone becomes a competitive player, entering local then provincial tournaments.  Some are content to stay in town, seeking company and building friendships at the social level, enjoying the companionship of club events.  In Winnipeg, the City provides the playing green to each Club.  Most clubs hold social events with fun as the principal aim, sometimes playing cards or hiring a caterer.

Some players start younger than others, engaging in junior competition on the weekends, even with other clubs.  Others discover bowls after retiring from an active business life, or when their family has matured and left them with fewer activities they can share.  Most clubs offer a trial period before a membership fee is paid–to cover supplies and green maintenance for the year.

Once you join a club, you may play as often as the green is open.  Inter-club games are held each month, so that you experience the facilities available at each of Winnipeg’s clubs.  During the winter, we take the game indoors at two of the recreation centres, so that no time is being wasted in our effort to keep you entertained, trained, and in touch with the friends you will be making there. 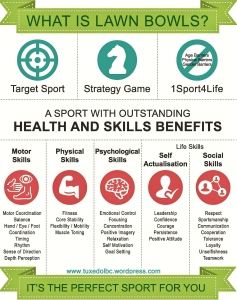