Congratulations to David Kerr, Donna Gobeil and Diane MacIver on finishing first in the Triples League. The team of Jerome Kirby, Mardal Flynn and Elaine Jones finished a strong second despite getting together in the latter part of the season.  Gerry Chudrick, Harold Forsyth and Rick Nobess finished third. A total of eight teams competed this season in the Triples League.

Although it was a shortened season this year due to Covid-19 it was great to be able to get out and bowl. Games were competitive and it was a great experience for everyone to play on a world class surface where controlling your weight and consistently finding the right line was challenging and a must to get the right shot. Special thanks to Gerry Chudrick and his dedicated crew for thier hard work and exceptional leadership in bringing these opportunities to us. Bravo! 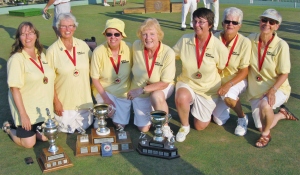